Ben Novak is an American geneticist and leader of the Passenger Pigeon Project.

Ben Novak studies the natural history of species that went extinct by humans. He is the project leader of the Great Passenger Pigeon Comeback, a project from the wildlife conservation organization Revive & Restore. In this project, he aims to incorporate biotechnologies like cloning and gene editing into conservation science. The aim is the de-extinction (bringing back an extinct species) of the American passenger pigeon, which went extinct in 1914. Among his collaborating partners are the paleogenomics lab from the University of California, Santa Cruz. 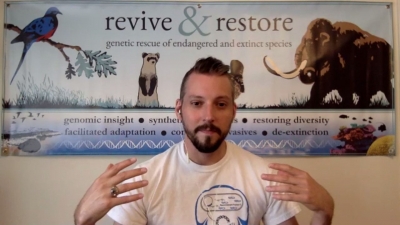 32:38
Can we reverse an animal's extinction?