Why we shouldn't tell migrant women to emancipate

We should be critical towards our patriarchal reflex to 'save' and emancipate migrants. Because it doesn't work.
Leestijd 3 minuten — Do 15 maart 2018
Hidden stories

Among elderly migrants loneliness, feelings of social exclusion and physical problems are high. They often lack the right connections and access to health care facilities. Municipalities try to bridge the gaps with community projects and direct help, but is that the way to go? According to dr. Fenella Fleischmann we should prevent imposing our ideas of emancipation and integration on migrants. Emancipation works best when it comes from the inside out. During the second screening in the series Movies & Science: Hidden Stories we watched the documentary Patience, patience, you'll go to paradise, an intimate portrait of six elderly migrant women in Brussels. These ladies were fed up with sitting home alone and decide to explore the world. It's an extraordinary and often funny tale, but as always: valuable lessons are to be learned.

Traditional values are not the problem

According to Fleischmann the story of the women in the movie is a representation of older (Moroccan) first generation female migrants in The Netherlands and Belgium. Fleischmann: “Their life here is centered around the home, with very low rates of labour force participation. If these women worked, it was usually in very low-skilled jobs and on an irregular basis, such as cleaning.” People often assume that this traditional task-division, where the man works and the woman stays at home, is caused by the traditional culture and attitudes of Moroccan migrants. But Fleischmann explains that we're mistaken: “Research shows that cultural attitudes contribute relatively little to the explanation of their low labour force participation.” The division in tasks is much better explained by the skill gap between men and women. The women in the movie tell how they watched their older brothers go to school, but they never went to school themselves. Education was out of reach for girls, while boys were allowed to go to school. Such practical matters pose much more of a barrier to participate in the work force and society.

Emancipation from the inside out

Fleischman points out that an atypical part of the story, actually contains a strong message. Mina, the protagonist of the film is inspired by a Moroccan poetry slam artist and decides to expand her own horizon. She participates in community classes to learn how to read and write, and meets women with a similar fate. Encouraged by the friendship they develop, the women start exploring and enjoying their independence. They take computer classes, make trips to the countryside and eventually end up in New York. Fleischmann: “We see here that the inspiration for the emancipation comes from the inside out, and is imported, as it were, from Morocco to Brussels, and in turn sets in motion a chain of events that changes the lives of an entire group of women.” Of course slam poetry won't change everyone's life like it did for Mina, but research shows the importance of such bottom-up processes, where women inspire each other, rather than imposing policy goals from the outside, explains Fleischmann.

Just as we mistakenly assume that traditional cultural attitudes are the barrier preventing female migrants to enter the labor force, we should be critical towards our patriarchal reflex to save and emancipate them from the outside. Instead we should start from their position, “which can only be known if we talk with them rather than about them”, according to Fleischmann, “and appreciate them as the independent, powerful actors who are able to achieve greater independence also without the support from 'us', our institutions and our 'superior set of values'.” Amen to that. 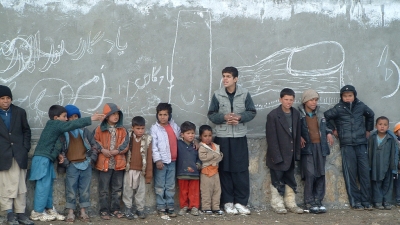 What is it like to be deaf in a world that is designed for hearing people?
Volg Studium Generale
Nieuwsbrief